Last month’s deadly cold spell in Texas and other areas of the South led to loss of power, water quality concerns for millions, and tragically, loss of life. Abnormal temperatures pushed all manner of equipment past its breaking point, and HVAC systems were hit hard.

You likely saw photos and videos of burst pipes and ice-covered equipment. So, from an HVAC perspective, what happened? For this post, we’ll be focusing on what happened, what caused it, and winterizing measures used in cold-climate heating systems.

In a nutshell, the February’s freezing temperatures overwhelmed the heating systems in the southern part of the central US. Electricity demand skyrocketed and supply just couldn’t keep up.

Some buildings were without power for several days. No power means no heating systems, which, in systems that use hot water for heating, can cause freezing and rupturing of coils if the working fluid isn’t removed. We know that water expands as it gets colder, which can cause the coil’s thin, copper tubes to fissure, typically at the return bend, like in the picture below. If left unrepaired, and depending on their location, ruptured coils can lead to massive damage costs, mostly from water. 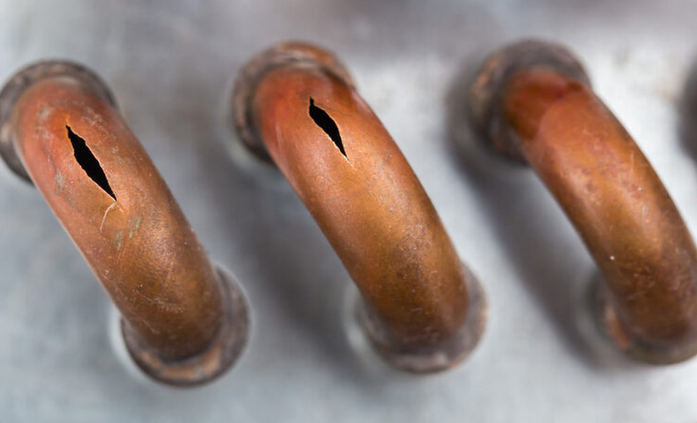 Systems in cold climates are designed specifically for those cold temps, which we’ll touch on below. However, the issues resulted from a lack of such measures in Texas, where winters tend to be mild.

Unsustainable power demand and the resulting loss of power was the culprit behind the system failures in the South. But even in cold climates where heating systems are designed for such temperatures, coils can still freeze, usually due to system-level issues in one of the following areas:

Control malfunction and other equipment failures

In cold-weather commercial systems using hot water for heating, the primary control meant to prevent freeze-up is the low-limit safety switch, also called a freeze stat, like the example below. 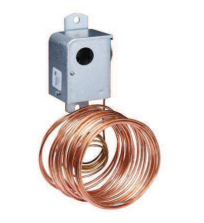 The freeze stat is a sensor in AHUs and RTUs that’s positioned between a system’s preheat and chilled water coils, where it monitors the inlet airstream’s temperatures.

These sensors are usually part of building automation systems, and will notify building maintenance of a potential freeze condition if it detects air temperatures lower than what the system’s designed for. The switch often requires a mechanical reset once the issue is determined and remedied.

If this switch fails, the chilled water coil can be exposed to low-temperature outside air without maintenance being notified. On a 50-degree day, that’s really no big deal, but sub-freezing temperatures will lead to coil freeze-up if gone unnoticed.

Malfunctioning outside air dampers themselves could also lead to frozen coils, even with a functioning freeze stat. Dampers that are stuck in the open position or otherwise operating improperly can lead to coil freeze-up during especially cold stretches. A malfunctioning damper could be the result of a number of electrical issues, like a burned-out actuator or faulty sensor.

Hot water from boilers is the critical element in commercial systems that use such water for heating. It provides heat to the system’s heat exchangers, including preheat coils, which heat outside upon entering the system and before the airstream passes over the chilled water coil.

Boiler failure or insufficient boiler performance puts virtually all fluid coils at risk of freezing during winter months. This can be caused by a number of factors, including:

Luckily, most causes of boiler failure can be prevented with regular inspections and routine maintenance.

Freeze conditions must be addressed when designing the system, and there are a few notable features that engineers include when hot water heating systems destined for colder climates. These winterization measures are supplementary to the freeze stat we covered in the previous section, and can also help with damage control in the critical hours following a power outage.

So, for the most part, it comes down to system design, and there are a few coil-level features that can help with damage control during a disaster, too. Tragically, last month’s weather struck an area of the country where heating systems just weren’t built to withstand it. It’s possible that the design conditions of equipment in that part of the country will be reevaluated and changed, if necessary, to prevent future freeze incidents.

If you’re an engineer working on such evaluations, give us a call. We’re fluid coil experts and would be happy to work with you to prevent future freeze events.

¹Penn is a registered trademark of Johnson Controls. Image used by permission.