4 Kinds of Tube-Side Coil Fouling & How to Prevent Them

Fouling is defined as a loss of heat exchanger performance due to some sort of material buildup. It can take a number of forms and can occur on either the tube side – measured by fouling factor inside (FFI) or the air side of the coil, measured by fouling factor outside (FFO). Either way, the end results are the same – a loss of performance. Corrosion is a major concern when designing heat exchangers and poses a chronic operating challenge. Corrosion fouling is very common, and there are multiple kinds and means by which they occur.

For this post, we’ll explain some common types of fluid side fouling, how they impact heat transfer performance, as well as some proactive and reactive actions to prevent and reduce them.

The first variety of corrosion fouling is that which is caused by galvanic corrosion. This occurs when dissimilar metals interact with one another in the presence of electrolyte; an aqueous liquid such as water is a common electrolyte.  When these three components are combined, essentially, a battery is created, with one metal acting as a cathode and the other an anode.

Electrons flow from the cathode metal to the anode metal, accelerating the corrosion of the anode. This typically manifests in the form of localized corrosion like pitting, crevice corrosion and stress corrosion cracking, all of which can impact heat transfer performance.

A second class of corrosion – non-galvanic corrosion – occurs as a result of the material’s environment. Non-galvanic corrosion encompasses a variety of corrosion types, but it’s most commonly used to describe the electrochemical oxidation of a metal in the presence of an oxidant like oxygen or sulfates. Over time, this corrosion can build up on heat exchanger surfaces, reducing flowrate, impacting metal-to-metal contact, and robbing performance.

The primary method used to prevent tube-side corrosion fouling involves minimizing the energy of the substrate – i.e. you want to be sure there’s no foreign material inside the coil, which could serve as an electrolyte, enabling corrosion. No electrolyte = no galvanic corrosion.

Scaling, also known as chemical fouling, is used to describe the buildup of calcium carbonate, or limescale, within heat exchanger tubes as a result of the evaporation of hard water over time. Often seen in fluid coils and evaporators in saturated environments as well as other wet applications, severe scaling reduces both flow rate and thermal performance from the fluid to the outer tube wall or from the air flow to the internally circulated fluid. Like most types of fouling, the presence of scaling is indicated by increased pressure drop, so inlet and outlet temperatures should be documented regularly so as to remedy the scaling before the tubes are completely clogged.

Calcium carbonate formation can be impeded and controlled through the use of various acids and chemical solutions. Phosphate compounds are typically used, but should be done in close coordination with water experts to ensure that proper chemicals and concentrations are used, as improper acid and chemical treatment can rapidly cause severe corrosion.

It should be noted that Super Radiator recommends simply using soap and water to clean a coil if necessary, but you should always consult your coil supplier or manufacturer to understand the impacts of cleaning on the product or its warranty. 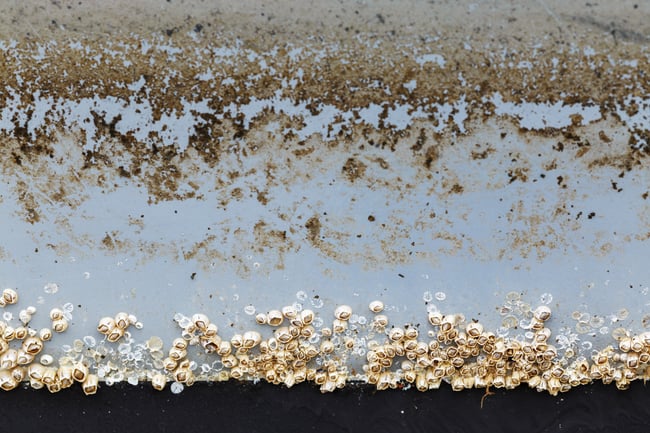 Also known as biological fouling, this type of fouling involves the buildup of biological matter, such as plants, algae, and microorganisms that cling to or build up on heat exchanger surfaces. This layer of biological material, often referred to as biofilm, is commonly seen in many marine applications or situations or fluid coils that use non-treated water, such as that from a lake or river. Biofouling can range from microscopic to large organisms such as barnacles and mussels.

This type of fouling results from the presence of solid particulate matter such as sand, dust, dirt, or other types of sediment in heat exchanger tubes. Not only can the accumulation of these materials impede the transfer of heat, but it can also invite the potential for corrosion in the affected areas.

Like some other types of fouling addressed in this post, a clean water source can significantly reduce the likelihood of particulate fouling. This can be done through a number of filtration measures. There are a variety of commercial filtration options that can be considered. If so, consulting a filtration expert is recommended.