Fin tube heat exchangers are subject to fouling, which takes place as long as there is an airflow or waterflow in the unit. Defined as thermal resistance due to the accumulation of contaminants on heat transfer surfaces, fouling negatively affects heat exchanger efficiency, longevity, and increases system operating costs.

On the outside – or airside – of the coil, fouling increases the airflow resistance over the finned tubes, resulting in less air for cooling. Additionally, fouling covers the fin surface, creating a barrier between the fin and the air and impeding heat transfer. This further reduces the heat exchanger's efficiency. That efficiency loss will be small initially, but can have a significant effect on the system if left uncorrected.

The severity of the efficiency loss varies greatly depending on several factors: coil design, type of fin used, the material causing the fouling, age of the coil, and how well or poorly the coil has been maintained. What can be done to prevent, reduce or mitigate fouling on coils? Three areas must be considered: installation environment, design and selection of the coil, and maintenance.

Understanding the environment where the coils will be installed is key to airside fouling prevention or elimination. There are numerous types of fouling phenomena which can occur on the fin surface:

Prevention or elimination methods for environmental fouling should be put in place during project scoping when possible. These methods may include filtration, screening, automatic cleaning processes, UV lighting, protective coatings, or defrost systems.

Certain design factors can help reduce the likelihood of fouling if a proper understanding of the installation and fouling potential exists. In their 2016 publication, (Sarfraz, 2016) Safraz and Omar find that airside fouling is dependent on these coil design factors:

Designing the best coil for the installation is a balance of fin design, tube rows and fin spacing. Because each of these elements is symbiotically related to the other, finding the right design may require a few iterations. These iterations can be done quickly using Super Radiator’s Enterprise design tool or by working with your Super Radiator application engineer. How do these elements affect the coil fouling and performance? Let’s take a look.

The first design element to consider is fin design. In a study published in 2018 in Applied Thermal Engineering, researchers found that airside pressure of louvre-fin samples and plain-fin samples would respectively increase by 42.4% and 25.5%, and their airside heat transfer rates would decrease by 35.6% and 17.9%. Here are the fin design options to consider, in order from least to most prone to fouling.

The number of rows of tubes within the coil will increase the potential for fouling, but without these added tubes the coil may not meet the desired performance. The relationship between the number of tubes rows is direct, as illustrated by the following diagram. 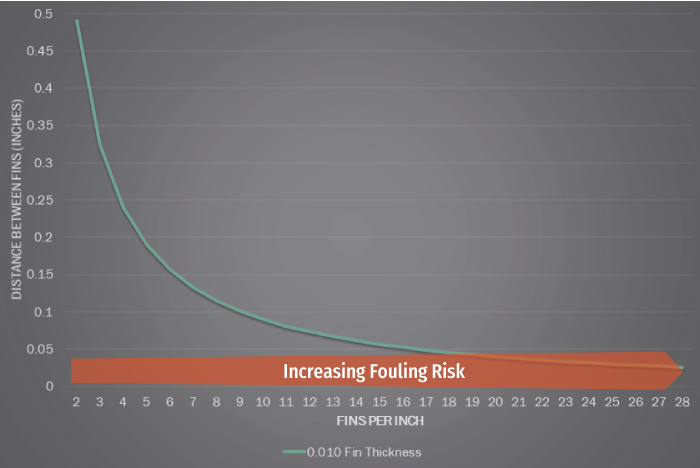 Our discussion of fouling has been focused on new designs and systems. But what can be done for an existing system? How do you know if fouling is a potential issue? Some warning signs include:

Periodic cleaning and inspection of coils should be considered essential maintenance. Unless the system has well-maintained filtering, most coils will eventually develop some level of fouling. With regular cleaning done in accordance with the manufacturer recommendation, many types of fouling can be controlled. Whether the fouling is biological or process byproduct, a low-pressure wash or brushing with a soft bristle brush may be all that is needed to restore the coil. Other fouling varieties may require more aggressive cleaning processes. Once the coil has been cleaned, it’s time to look for ways to reduce the fouling.

Changing the System or Environment

With a clean coil in place, steps may be taken to reduce or prevent future fouling. Depending on the nature of the fouling, installation of filtering, bird screens, or wire mesh may be effective. Evaluation of a process may determine that a change in process would reduce the debris that is carried into the coils. For fouling caused by frosting, alternation of the control system is an effective solution. It should be noted that care should be exercised to evaluate the full impact on the operation before making these changes.

Should cleaning the coil be impossible or ineffective, or if the system cannot be altered, changing the coil may be the best solution. In cases of extreme corrosion, certain particulate fouling, and sticky substances, cleaning will not restore the coil to the design performance. At best, a marginal performance gain could be realized. At worst, the coil may become unusable, but the time to evaluate replacement coil options is before that happens.

While doing a like-for-like replacement can be simple, a system evaluation is often needed to reduce future replacements of the coil or prevent replacement altogether. Using the desired system outcomes, understanding the operating environment, and looking at full operation impact, the system can be restored and often improved without significant size envelope changes. Super Radiator engineers are here to find solutions to your problems, not just quick fixes. They’ll work with you to understand why fouling occurred and how we can make sure it doesn’t happen again.

Airside fouling is present in all coils to some level. It can be addressed at any stage of a coil installation – new design, existing system, or replacement. Working together with Super Radiator’s application engineers, the best solution can help you find the best balance of coil design element, system integration and maintenance. Give us a call today. We're here to help.

Don’t get left out in the cold when it comes to heat transfer information. To stay up to date on a variety of topics on the subject, subscribe to our blog and follow us on LinkedIn, Twitter, and YouTube.