For low-temperature hydronic systems, systems in which chillers and AHUs are located outdoors, or other equipment used in low-temperature processes, some form of glycol is a critical ingredient. It works to lower the fluid’s freezing temperature, enabling lower-temperature operation and preventing freezing. 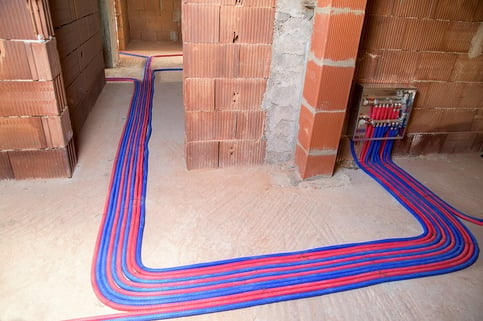 Basically, if there’s any risk of your fluid-containing equipment being exposed to freezing temperatures, it needs some form of glycol. There are two main types of glycol used for this function: ethylene and propylene. Some important differences exist between the two, and they should be understood before making a decision.

Looking for a quote on fluid coils and short on time? Submit a request on our Fluid Coil Quick Quote form and we'll have a quote over to you in as few as 24 hours.

What is ethylene glycol?

Ethylene glycol (CH₂OH₂), also known as 1,2-ethanediol, is an alcohol-based organic compound often used as an anti-freezing agent in HVAC equipment and vehicle systems, among others. Its an odorless, colorless, viscous liquid, known to have a sweet taste. 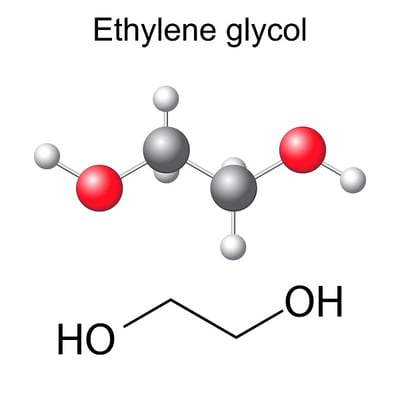 In its pure form, ethylene glycol freezes at around -10°F, but when mixed with water, it can remain liquid at much lower temperatures. For example, a mixture consisting of 40% water and 60% glycol can withstand temperatures close to -50°F before freezing.[1]

When should I use ethylene glycol? 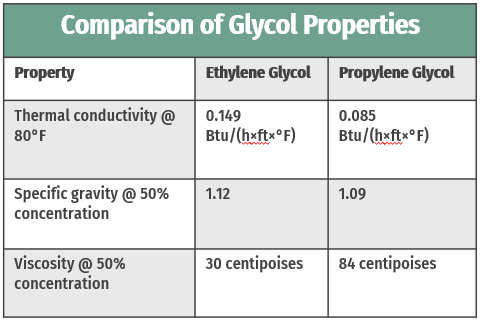 Essentially, if none of the circumstances in the next section describe your application, ethylene glycol is likely the better option.

When shouldn’t I use ethylene glycol?

Ethylene glycol is toxic to humans, causing a number of physiological issues when ingested, including death (the Centers for Disease Control estimate a lethal dose to be between 1,400 and 1,600 mg/kg). As a result, ethylene glycol should not be used in applications in which contamination of drinking water is possible. It should also not be used for heating or cooling systems at facilities like food processing plants or other operations creating products for consumption.

The reason for this is two-fold. Ethylene glycol is harmful to terrestrial and aquatic animals, and when deposited into waterways, takes roughly 10 to 30 days to biodegrade. Glycols biodegrade through aerobic biodegradation, during which the breakdown of glycols is enacted by bacteria, which require oxygen to perform this function. This action depletes the oxygen levels of the effected waterways, which can have devastating effects if the amount of glycol and rate of biodegradation are great enough.

What is propylene glycol?

Propylene glycol (C₃H₈O₂), also called Propane-1,2-diol, is a synthetic liquid used for a litany of purposes across dozens of industries. It’s a viscous, colorless, nearly odorless liquid that possesses a faintly sweet taste. 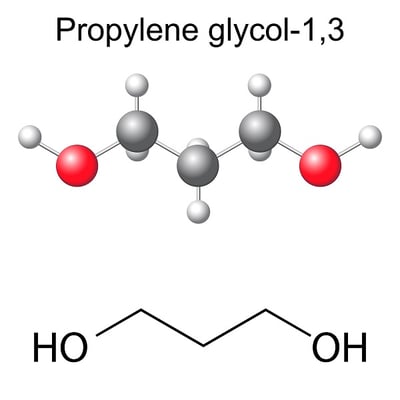 Like ethylene glycol, propylene glycol is combined with water in variable concentrations to depress the freezing temperature of a working fluid in heat transfer applications.

When should I use propylene glycol?

The answer to this question also answers the question of “when shouldn’t I use propylene glycol?” as well. Relative to ethylene glycol, propylene glycol’s higher viscosity and friction loss combined with its lower heat capacity typically limit its usage to applications with safety concerns.

There are extremely few, if any, instances where propylene glycol would be chosen for its thermal performance. It’s simply less effective than ethylene glycol for its intended function. But given ethylene glycol’s toxicity, several applications exist for which propylene glycol must be used, such as those we covered earlier in this post, namely food production, applications in which water contamination is possible, and the HVAC systems at facilities of these types.

Propylene glycol is considered to be relatively safe for humans. It’s a common ingredient in a variety of beauty products, pharmaceuticals, and indirect food additives. While less toxic than ethylene glycol, propylene glycol can pose some environmental concerns.

Still not sure which type of glycol is best for your application? Give Super Radiator Coils a call, and let’s talk.