Our refrigerant focus series consists of deep dives into the history, properties, suitable applications and pros and cons of some of today’s common refrigerants. This installment will focus on R-410A.

Check out some of our refrigerant focus posts below

R-410A was developed and patented in the early 1990s by what is now Honeywell International and is known by such trade names as Puron and Suva 410A, among others. Prompting its creation were edicts outlined in the Montreal Protocol (1987), the international treaty aimed at addressing substances contributing to the depletion of Earth’s ozone layer on a global scale.

Among the substances designated by the Montreal Protocol as a significant cause of ozone depletion were hydrochlorofluorocarbons (HCFCs), such as the refrigerant chlorodifluoromethane, or R-22.

R-22 was one of the most widely used refrigerants of all time, and the eventual moratorium on its import and production meant that the race to develop a replacement was on. Over the next handful of years, R-410A proved to be the best replacement for commercial and residential HVAC systems around the globe.

R-410A is a member of the hydrofluorocarbon (HFC) class of refrigerants and is composed of equal parts R-32 and R-125. Its chemical formula is CH₂F₂ + CHF₂CF₃.

Classified as a zeotropic refrigerant blend (meaning its constituent substances boil at different temperatures), R-410A is considered to be “near-azeotropic” This means that despite the disparity between its components’ boiling temperatures, it results in very little glide – which describes the temperature difference between the start of the first substance’s boiling process and the conclusion of the second’s. The table below shows some other properties of R-410A. 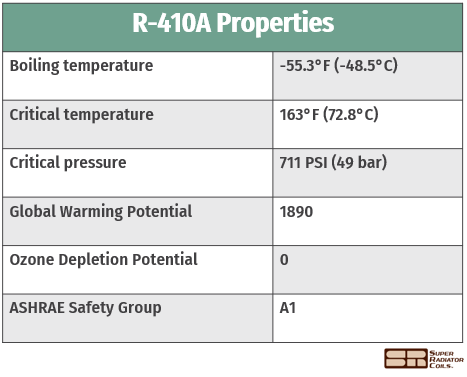 R-410A is primarily used in commercial and residential HVAC systems.

Thermal performance is among R-410A’s chief benefits. To illustrate, we’ve run a theoretical 36” x 70” 2-row condenser through our coil selection software to examine how it would perform when running R-410A. The coil’s airside and tube-side requirements are below and the coil’s rating is below that. For comparison, we’ve included a rating for the same coil running R-22. 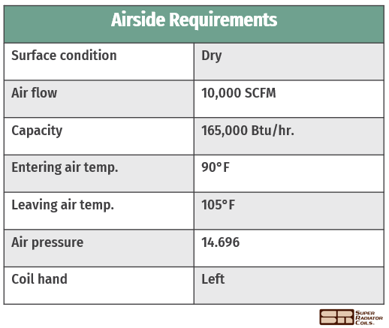 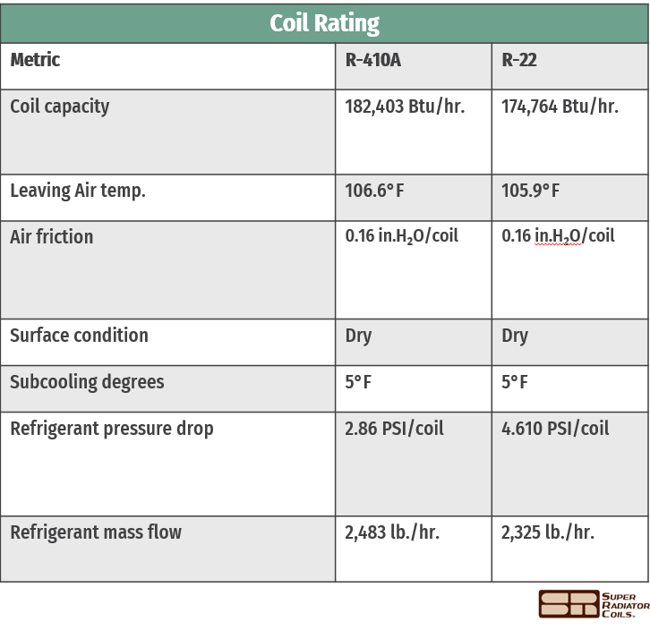 The chief drawback of R-410A is its Global Warming Potential. While the Montreal Protocol sought to eliminate substances with the potential to deplete the ozone layer, most refrigerants developed in response to the treaty are not altogether environmentally unharmful. R-410A has an ODP of zero, but its Global Warming Potential is 1890, which is fairly high. For context, carbon dioxide’s GWP is 1, and it’s the standard by which other refrigerants are measured, meaning that R-410A contributes to global warming 1890 times as much as carbon dioxide.

Beginning in 2018, legislation has targeted higher-GWP refrigerants such as HFCs like R-410A, and it’s likely the refrigerant will meet a similar fate as the R-22 it was developed to replace.