Our Refrigerant Focus series delves into the history, properties, suitable applications, and pros and cons of some of today’s popular or otherwise noteworthy refrigerants. This installment will focus on R-32.

Check out some of our refrigerant focus posts below

The ongoing phaseouts of various refrigerant classes and the refrigerants that comprise them have created a need for replacements that balance efficiency with reduced environmental impact. Of these “next generation” refrigerants, difluoromethane is a popular option for residential and commercial systems, especially in Asia.

In the United States, however, R-32 is one of 18 HFC refrigerants designated by the EPA to be phased down by 85% over the next 15 years. For more information on that phasedown, check out some of our podcasts.

R-32, also known as HFC-32, is an organic hydrofluorocarbon compound with the formula CH₂F₂. It’s a colorless odorless, mildly flammable gas which is insoluble in water. Some of its properties are contained in the table below. 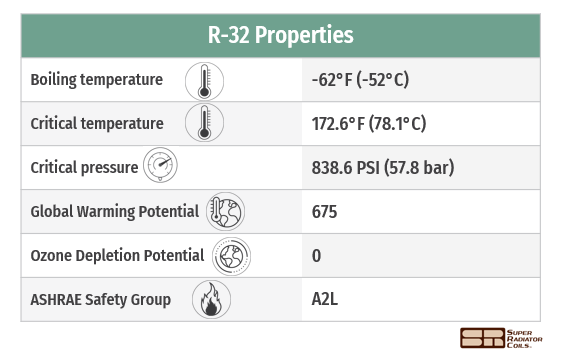 As we touched on earlier, a primary driver of R-32’s ascendant popularity is its combination of efficiency and low environmental impact. With a GWP of 675 and an ODP of 0, R-32 has far less impact on the environment than its CFC predecessors, outlined in the table below.

History of R-32 as a refrigerant

Despite its next-gen moniker, R-32 has been on the refrigerant scene for quite a while, although not in its pure form. R-32 makes up one-half of R-410A, a two-part refrigerant used as the primary replacement for R-22 around the world.

R-125, the other half of R-410A, was included for its fire suppression properties, rendering moot the flammability concerns that disqualified pure R-32 from consideration as a widespread replacement of R-22 at the time of R-410A’s development.

In recent years, R-32 has seen its usage – mostly as a replacement for R-410A – skyrocket as manufacturers seek lower-GWP alternatives to R-410A.

HVAC system manufacturer Daikin estimates there are 100 million R-32 units on the market today. It should be noted that Daikin also manufactures R-32.

Difluoromethane is used for a variety of HVAC applications, primarily for residential and commercial air conditioning, such as portable air conditioners and window units, for example.

The chief benefits of R-32 are its efficiency as well as reduced environmental impact relative to HCFCs like R-22 and refrigerant blends like R-410A. Its performance and operating characteristics are very similar to R-410A, yet with roughly one-third of the Global Warming Potential.

There’s very little difference between R-32 and R-410A from a performance standpoint, but R-32 is significantly more efficient. For example, a theoretical 36” x 70” 2-row condenser running on R-32 would need 40% less refrigerant than the same coil running on R-410A to meet the same requirement. See below for those coil specifications and rating. 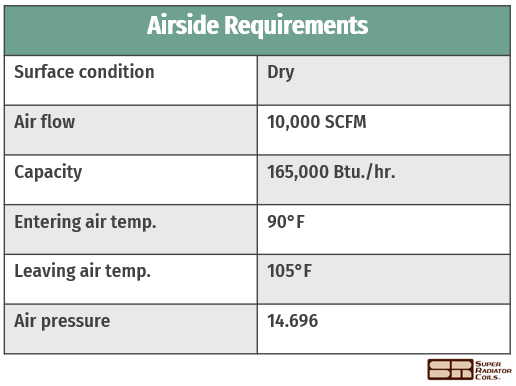 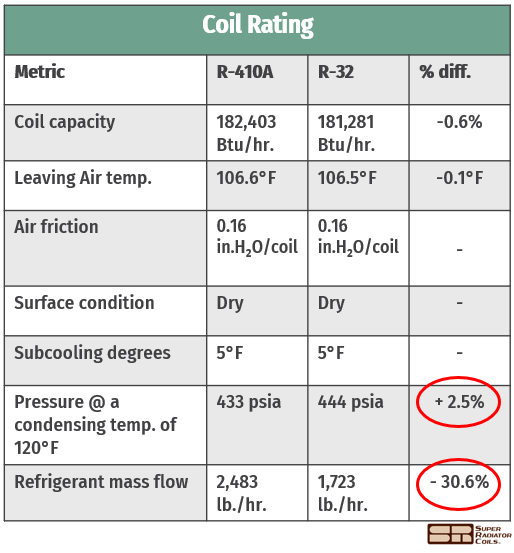 Concern around R-32’s designation as mildly flammable has waned in recent years as millions of units have been installed and used safely, and due to the fact that actual ignition of R-32 is very difficult, due to its low burning velocity.

The difference between the operating  pressures of the two refrigerants should be noted, too. While not drastic, the difference isn't insignificant.

Another potential drawback is the unknown future of R-32. Despite its low GWP relative to older HFCs, 675 is a fairly high number when compared to that of the refrigerants that have been developed in the years following R-32’s entrée onto the refrigerant landscape. HFOs like R-1234yf and R-1234ze as well as natural refrigerants like carbon dioxide, the popularity of which has grown in recent years, all have Global Warming Potentials under 5.

Looking to learn more about the performance of your R-32 equipment or considering a refrigerant change down the road? Give us a call to take advantage of our performance modeling and testing capabilities.