There are a number of industrial processes that require extremely cold temperatures – sometimes as cold as -150°F. For the equipment used in such applications, those low temperatures pose some unique challenges. In this post, we’ll detail some of the temperatures involved and outline some things to consider with regard to heat exchanger design and materials for low-temp applications.

To start, let’s talk about some terms we’ll use in this article. We usually see the term “low-temperature” used when referring to temperatures down to about -50°F – cold, but not super cold – things like chillers, light freezers, etc.

Ultra-low temperature – or ULT – is often used to refer to temperatures between -50°F and -100°F. Once the operating temps dip into this territory, the importance of design and material choices is ratcheted up.

That said, for the purposes of this article, we’ll be focusing on applications whose temperatures are roughly between -150°F and -50°F – more or less the “ultra-low” temperature range. While not a comprehensive spectrum of low temperature environments, this range is where most of our low-temp products are applied and where our expertise lies as a company.

Temperatures this cold – especially in the cryogenic range – dictate a comprehensive understanding of how your equipment will hold up throughout its service life. Those low temperatures also disqualify certain materials from being used in some low-temperature applications. The following section contains overviews of some low-temp materials and a reference table at its conclusion.

For example, mild steel, a high-temp workhorse used across a wide range of heavy industries and applications, is impractical for the majority of low-temp applications below -20°F.

At temperatures under that threshold, low-carbon steel becomes brittle, leaving it weaker and more prone to cracking – also known as “brittle fracture” conditions – not going to cut it for ultra-low temp applications.

In fact, it’s believed that brittle fracture was partially to blame for the sinking of the RMS Titanic, due to a lack of a mature understanding of ductility among the engineering community at that time. The steel used to build the Titanic was later found to contain large amounts of sulfur, which is thought to have made it more brittle and contributing to its eventual failure. This tragic oversight speaks to the importance of understanding the elemental composition of your materials and how the properties of those elements can impact those of the steel itself.

Now that we’ve crossed mild steel off the list of practical materials, let’s switch over to its chromium-containing counterpart. Unlike mild steel, equipment made from stainless is far better suited for ultra-low temperature and cryogenic applications, capable of operating in temperatures as low as -320°F.

Of the materials covered in this post, copper and cupronickel are able to withstand the lowest temperatures, with each able to handle temperatures as low as -450°F – nearly absolute zero. Copper is a tremendous material for the purposes of heat transfer, but will corrode if used in systems running ammonia or in environments with a dirty airstream. 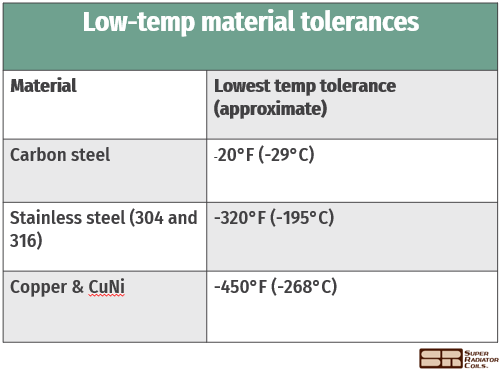 If your installation environment has wet air, frost mitigation should be accounted for when designing your heat exchanger, and thoughtful fin spacing is one method of doing so. For humid environments, the fins in our ultra-low temperature products are usually 4 fins per inch (FPI) or less. The reason for this to prevent frost buildup between fins – known as bridging – which reduces heat transfer surface area, reducing performance.

Bare-tube heat exchangers, which have no fins at all, are also common. We typically design these for environments with high levels of fouling – due either to frost or some other particulate in an industrial environment.

Frost should be considered when deciding on fin configuration as well. The more intricate fin surface configurations have a higher likelihood of frost bridging when used in humid conditions.

Another way to combat frost buildup at super-low temperatures is to include a defrosting loop within the coil, oftentimes the evaporator. Essentially, this consists of dead tubes spaced strategically throughout the coil into which some type frost control measure is added. This can be in the form of electrical heating elements, a glycol solution, or some kind of thermal oil.

Do you have an ultra-low temperature application you could use some help with? Give us a call. We’re here to help.