There are dozens of commercially available refrigerant options on the market today, including numerous refrigerant blends, which aim to replicate the effectiveness of former workhorses like R22, the production of which was made illegal as of January of this year. Two popular examples of refrigerants developed in the last 30 years or so that are used in the HVAC industry are R-410A and R-407C. These two refrigerants are often used for similar applications, but they have some marked differences that should be understood and considered when deciding between them. 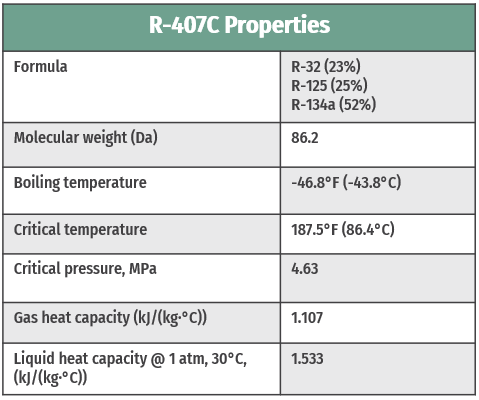 One benefit of using R-407C at high-ambient conditions is that it operates at relatively low pressure. One drawback to note, though, is R-407C’s glide of 10°F. Because R-407C is a zeotropic mixture, glide is the temperature difference between the three substances’ boiling points. While ten degrees may not seem like much, it can have real impacts on other elements of a system.

This glide can negatively impact performance of a system in a high-ambient condition, due to the close approach temperature between the condensing point of the last condensing refrigerant and the airflow. Increasing the condensing temperature might not be an attractive option, due to the maximum discharge allowable for the compressor. To compensate for this, certain components like condenser coils or condenser fans need to be larger, which comes with a number of implications, most notably around cost.

Like R407C, R-410A is a zeotropic mixture, and it’s made by combining R-32 and R-125. In the case of R-410A, however, this difference between their two boiling points is fairly minimal, and the refrigerant is considered near-azeotropic. Azeotropes are mixtures with a constant boiling point, the proportions of which can’t be changed by way of distillation.

R-410A is very popular for several HVAC applications, like condensers. However, at high ambient temperatures, R-410A’s operating pressure is much higher than R-407C, leading some to consider other options for such applications. While R-410A’s operating pressure at high ambient temperatures is inarguably higher than that of R-407C, at Super Radiator Coils, we’re able to produce UL-listed solutions that use R-410A for up to 700 PSIG, making it a completely safe and effective refrigerant for warmer climates.

R-410A is very popular for residential and commercial air conditioning in several markets, including The United States, Europe, and parts of Asia. The trepidation regarding its high operating pressure in warmer ambient temperatures could explain why R-410A isn’t as prevalent in places like the Middle East or tropical parts of the world.

Give one of our engineers a call today to see if R-410A could be a better option for your high-ambient heat exchanger needs.