As far as stages go, professional football's championship game is one of the biggest out there, and there’s a small army responsible for making sure everything goes off without a hitch. Behind that army of personnel is an even larger assemblage of vehicles, equipment, and other technology that help along the way – one of which is the heat exchanger.

Heat exchangers of all shapes, sizes, and functions play a part in the Great American Game – from down on the field to very high above it. So, we thought it’d be fun to list some that help to make the big game everything we know and love. 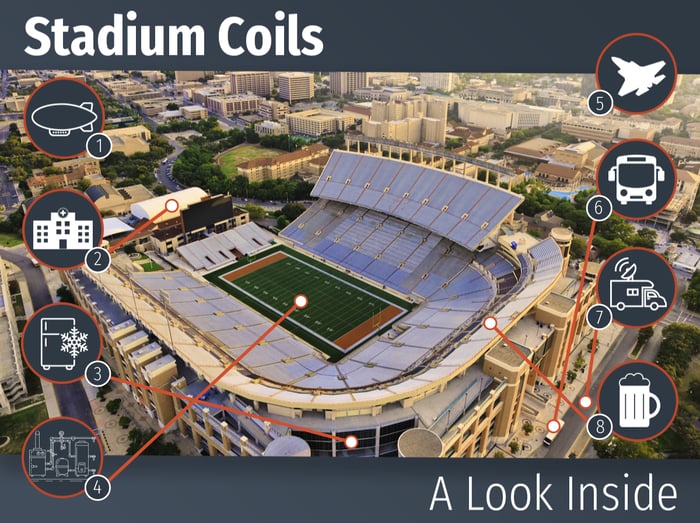 Airships like the iconic Goodyear Blimp provide aerial photography for television broadcasts. Their shots set the scene and help capture the energy and magnitude of the Big Game. In the past, radiator coils would have been used to cool the engines of large zeppelins, but most blimps today are air cooled.

Today’s NFL is home to some of the most advanced athletic training facilities around. Equipment like cryotherapy chambers rely on heat exchangers to provide the icy temperatures used to help athletes’ body recover from the stress of training and games.

From diehard tailgaters at the stadium to casual observers at home, good grub is a super bowl staple. Heat exchangers are used across virtually all facets of the world’s food chain – everything from helping to grow crops to keeping food fresh during storage and transportation.

4. Coils used to heat the field

While not a true "coil", heat transfer is critical in the advanced hydronic systems used to prevent the football field itself from freezing. Massive boiler rooms located deep within the stadium circulate a heated glycol solution throughout miles of piping beneath the field, with this maze of tubing essentially playing the role of a massive coil.

Coils are used to cool electronics onboard military jets used in the classic pre-game flyover. Coils are also used in ground support equipment (GSE). This equipment helps keep teams and planes cool while on the ground.

Digital Satellite News Gathering, or DSNG, is one method for transmitting broadcasts on location. These are the unmistakable satellite-clad vans and trucks that descend on the Super Bowl by the dozen. Radiators are used to help ensure their engines don't overheat.

It wouldn’t be a super bowl without some suds, right? Heat exchangers play important roles in the brewing, transportation and storage of football’s favorite drink – beer!