This post summarizes the design and results from a set of tests recently conducted at Super Radiator Coils.

When fouling of the heat exchanger surface occurred or when condensate formed, the air friction increased dramatically, lowering the air flow rate, and reducing the heat exchanger’s capacity. Air friction is always the function of face velocity, but the relationship between the two varies with different tube patterns, fin configurations, etc.

Now, on to the test. Under wet-surface conditions, ARI standard 410-2001 (2001) required that the test be conducted with the entire air-side surface actively condensing moisture. To make sure the air-side surface is fully wetted, the following conditions should be ensured.

For these tests, heat exchangers were installed in a closed-loop wind tunnel with a blower circulating air within it (see Figure 1). The air flow’s direction was perpendicular to the front face of the heat exchanger. The condensate that formed on the heat exchanger surface either fell of due to gravity or was blown off by air flow. A water heater and a glycol cooler were used to control the air temperature inside the tunnel.

The air’s relative humidity was measured at the inlet and outlet. The pressure drop on the air side was measured by differential pressure transducers. The water flow rate was measured with a turbine flow meter. All sensors and meters were calibrated according to ASHRAE standards.

The air face velocity, the inlet air dry-bulb temperature, the air inlet humidity, the water inlet temperature and flow rate were maintained and recorded under steady-state conditions during the test. The condensate that formed inside the heat exchanger was captured by a pan positioned underneath the test heat exchanger and the water’s weight was measured every 30 min. 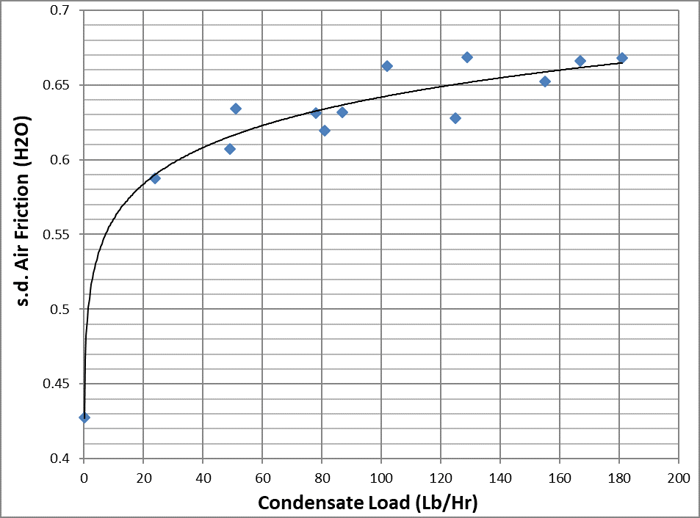