What is a Coil Leak and How Are They Measured?

Nobody wants leaky coils. You don’t want to waste time and money on buying them and we certainly don’t want to be the one to sell them to you. The goal of this post is to define what a “leak” is from our perspective as a manufacturer and coil supplier. Rather than leaks in the field, this post focuses on what “leak” means in new equipment. To do so, we’ll look at:

What is a Coil Leak?

This may seem like a silly question, but it’s true that all leaks are not equal, so the answer isn’t quite that simple. For the purposes of this article, a leak is a void of some kind in a heat exchanger from which the equipment’s working fluid can escape.

It’s important to note that even though your coil may have a void, it might not leak. The molecular size/mass of your working fluid has to be smaller than the void within the coil. R-134a, for example, has a molecular mass of 102 g/mol whereas ammonia’s is only 17 g/mol. So, a pinhole just big enough to allow ammonia to escape would have to be several times larger to constitute a leak in an R-134a system. The videos below show three examples of leaks, ranging from moderate to severe. How are Coil Leaks Measured?

Leak rates are specified using the measurement grams per year, which is an extrapolation of atm-cc/sec @ 25°C assuming a constant pressure differential. Testing pressures are typically designed in accordance with a standardization organization such as UL, ASME, and others. Customers can then specify any additional requirements from there.

Typically, Super Radiator’s standard leak tests are conducted using between 250 and 600 PSI of dry nitrogen for one minute, but various other gases and pressures can be used depending on the application’s specified leak testing procedure.

How are Leaky Coils Diagnosed?

Coils are submerged in water and then pressurized and leaks appear as bubbles under the water’s surface. Tests can range from lower pressure, molecularly larger gases for higher leak rates to higher pressure tests using molecularly smaller gases to determine minute leaks. Two popular leak testing gases which we use regularly are listed below.

Our test tanks are where we conduct the aforementioned dry nitrogen and helium leak tests. Helium leak testing is a more involved testing method. It requires extra work steps and different personnel skills, and it comes with a higher cost. Depending on the situation, some suppliers may outsource it.

We also have a few helium leak-detecting wand options for customers that request it. 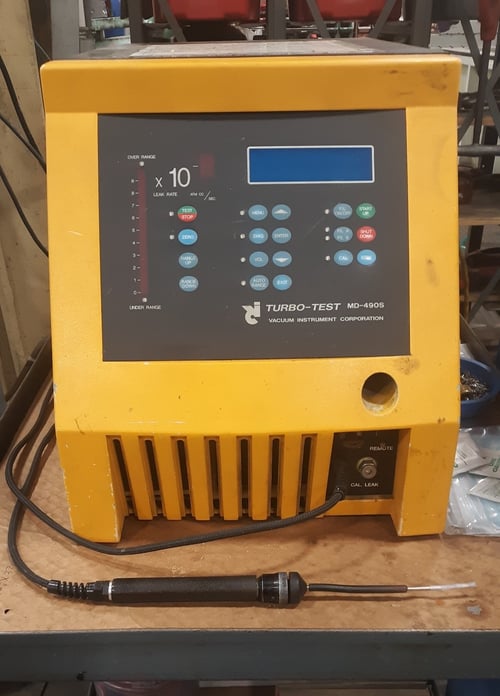 These sophisticated pieces of equipment feature extremely sensitive sniffers that can detect miniscule trace amounts of gases. These tools help us provide our customers with precise leak testing procedures. The sniffer can be dialed in anywhere between 10(-1) and 10(-10), allowing for testing procedures to match the requirement of their specific application.

It’s important that manufacturers and buyers establish leak testing parameters as a part of the coil’s design. Aligning expectations – especially when it comes to “the ‘L’ word” during the equipment’s design phase is good practice and can spare both parties future headaches.

If you’d like a higher level of rigor beyond our standard leak test, we can augment our procedure to align with your standards. If you’re an OEM who’s having issues with leaking coils, give us a call. We’ll design a custom quality program to make sure your equipment meets your standards.